Starting in the 1870s, French-Canadian immigrants, driven from rural Quebec by land scarcity, depleted farms, and poverty, began to enter the labor force of the Amoskeag mills. One of the interviewees, repeating her father's deathbed admonition, expressed the despair shared by many Quebec farmers : "When I'm gone, don't keep this land. Sell it." By 1900, the already recruitment of French Canadians into the Amoskeag had significantly altered the Manchester's population. Quebecois priests, who had earlier resisted their parishioner's immigration to New England, now succombed to that stream of migration and proceeded to establish parishes in their new locations; the first French parishes were founded in the 1890s.

The Amoskeag Company, like other New England companies, soon concluded that the French Canadians were the ideal labor force and proceed to recruit them systematically. By the end of the nineteenth century, mill agents from New England had become a well known phenomenon along the Quebec countryside. The editor of the Quebec newspaper Le Travailleur testified before the Massachusets Bureau of Labor Statistics about the pervasiveness of this practice :


I have a letter from a agent of the Boston and Maine Railroad who says he is ready to testify that since two years, no less than one-hundred superintendants or agents of mills have applied to him for French help, one mill asking for as many as fifty families at a time."

The Amoskeag had a special advantage in the recruitment of French Canadians because of its location on the railroad route between Montreal and Boston. In addition, the Amoskeag advertisement in Quebec newspapers, including elaborate descriptions of the fine working conditions and attractive opportunoties, accompanied by photographs of the millyard, were all designed to attract farmers as well as industrial workers. The typical advertisement read as follows:


More than 15,000 persons work in these mills that border on both sides of the river. Their wages allow them comfort and ease and all seem to be content with their lot. It is true that the larger company to wich they sell their labor treats them as its own children...[The article here proceeds to enumerate the welfare activities of the Company,] That is the reason why the Amoskeag Company has never had any trouble with is employees. It treets them not as machines but as human beings, as brothers who have a right not only to wages but also to the pleasur of life... Its employees work not only to earn a wage but to please their employers, who know how to treat them well. It has resolved with justice to itself and its workers the problem of the relations between capital and labor.

This migration to Manchester was part of a larger Canadian influx to other New England industrial towns. Manchester was exceptionnal, however, in the size and cohesion of the French-Canadian community that developped on its West Side from the beginning of the twentieth century. Even today, this section of the city is often referred to as Little Canada. By 1910, French Canadians comprised 35 percent of the Amoskeag's labor force and 38 percent of the city's population.

The fact that management recognised the French Canadians as a "docile", "industrious" and "stable" labor force made them especially welcome. They were partularly well suited to textile work because of the large number of children in their families. By contracting with one worker, the Amoskeag frequently could bring an entire family group into the mills, with the likehood that additional kin would follow later with their own large families as well.

Their emergence as a critical segment of the mill's labor force by no means gave the Frenc Canadians a position of power, though they did fill a signifiant portions of the skilled and semi-skilled jobs. The ranks of overseer and second hand were still confined, by and large, to native-born Americans, English, Scottish, and second-generation Irish, with an occasional sprinkling of Germans and Swedes, By the time the French Canadians might have had a chance to enter supervisorsory ranks, the Amoskeag was already on the decline, heading toward shutdown. As a result, the French Canadian drew their strnght from sheer numbers. In many workrooms, the bosses where forced to learn some French in order to maintain smooth operations. 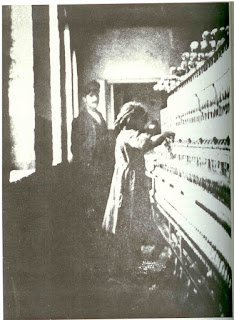 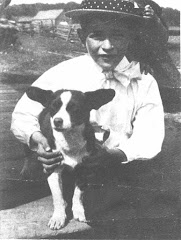